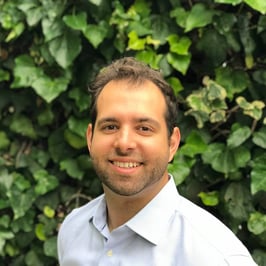 Jordan grew up  witnessing his parents start and build Language Network from a single interpreter to the company it is today. This provided him with an interest in other cultures from a very young age that led him to both study abroad in Mexico and major in Spanish Language and Literature alongside his Business and Economics major. After college, he worked in almost every position imaginable at software startups in marketing, and by 2016 felt like he could add value to Language Network with this experience and decided to join the company.

Jordan is most proud of his decisions to marry his wife Elisse and adopt their French Bulldog, Tyson. He has a love of learning and spends lots of his free time reading books and listening to podcasts. His appetite for learning is never satisfied and he strives to be a life-long learner. He and his wife try to frequently get to the beach and enjoy playing beach volleyball together when they can. Jordan has a passion for wine and coffee and is often experimenting with new wines and new coffees. He has even started roasting his own coffee beans at home, getting his beans from a local importer. Jordan also might have the most dad jokes of any non-dad out there, and has a unique gift for finding the interesting in even the most mundane.

Jordan values a sense of curiosity and the idea of Kaizen, continuous improvement, both for business and personal growth. Other values he holds highly are integrity and grace. He finds integrity refreshing as it grows increasingly difficult to pin down what’s real in all the noise of our culture. Grace plays a large role in Jordan’s life, as he finds it important to practice the discipline of forgiving both himself and others through grace.